Correlation between lameness and reproductive disorders of dairy cows 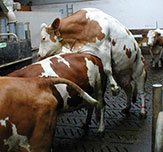 Mounting is an important criterion in determining the time for insemination. Cows with healthy claws kept on rubber mats show this behaviour more frequently, because they can move around free of pain and safely.

The cows feel safe and have confidence in the KURA floor. A survey conducted by Strues & Malkow-Nerge (2008) revealed that animals with claw problems had notedly longer calving intervals of from 17-45 days. This confirms the results by Kremer et al. (2007): cows on slatted floors with KURA S had a 39 day shorter calving-to-conception interval – which means a cost savings of approximately returning to oestrus twice!