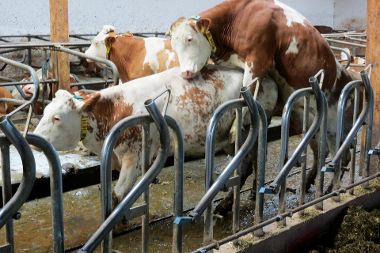 Martin Vorbuchner built his cattle house in 1997, initially with concrete walking areas. After just two years, the concrete had become too smooth. Roughing it up only produced short term benefits. Finally, he heard about KRAIBURG rubber mats and decided to try them.

They were first installed on one walking alley, and then on the second. After some 15 years, the KURA P mats are still showing no signs of wear and Martin is still happy, and so are his 60 dairy cows.

“Before the rubber mats, we soon had problems with the concrete walking areas because the concrete became too smooth. The cows stopped mounting each other because they suffered such bad falls that they just gave up.

After we fitted the rubber mats, the cows quickly became much more active and felt great. What's more, we could see clear signs of heat because they could move around and mount each other safely in the walking areas. I would - and do - recommend them to anyone! My claw trimmer agrees. He comes twice a year and says that he now just has to make simple, clear corrections. We’re still seeing all these benefits that the rubber mats have brought right from the start, even after more than 15 years.

The cows are now walking properly too - after all, it is loose housing!

In the past we had even lost animals due to the slippery walking areas, you expect natural losses. When you look at it like that, investing in rubber mats pays off quickly.”